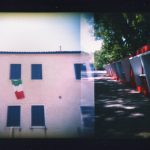 When I visited Venice with Mum in May of 2011, Mark loaned me his Holga and some rolls of colour and B&W film, although neither of us thought to have a run-through of the camera and its’ workings before I went. Consequently, I had little understanding of how to correctly wind on the film, the result of which can be seen below in the prints that have all run together.

Despite this, I really liked them, as I have inadvertently captured a ‘Venice Collage’, or as the title of this post suggests, more an ‘impression’ than anything else. Some of the individual frames were over-exposed, but this was probably down to me forgetting to set the camera on ‘sunny’ and instead using the ‘cloudy’ setting instead. For those that don’t know, the Holga is a very simple plastic camera, with plastic or glass lenses and extremely basic controls over aperture and shutter speed (it only has one – around 1/100th sec).

I managed to rescue the over-exposed frames using exposure adjustment layers in Photoshop, then masking this where it was not needed. These two strips were taken on Isola di San Michele, the cemetery island in the lagoon between Venice and Murano. There was much white marble everywhere, and it was a very hot, very sunny day so the lighting was really contrasty, but I reckon the camera managed really well.

I have also used Levels and Curves adjustment layers on most of these strips, as some came out rather flat and lacking in contrast, and once again these effects were masked out where they were less needed.

It’s all something a bit different for me, and it was fun to use a film camera and to not be able to see the results immediately as I have become accustomed with digital photography. In fact, I have only just had the films developed – they have been sitting on my desk since last May!

15 thoughts on “Holga Impressions of Venice”