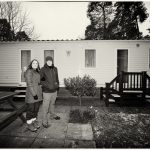 Mark and I went down to the caravan owned by him and his Mum at Sandy Balls for a one night getaway this previous weekend, and spent a lot of time happily absorbed in photography on both days.  Saturday was bright and clear, very cold and with more snow still on the ground, Sunday was less cold but grey and overcast. However, the different types of light on both days was good for different types of photography, so it worked pretty well.

Mark had taken his three flashes and lighting rig comprising of a very tall stand and softbox, and was keen to try some strobist self-portraits, whilst I had taken my flash but was only using it on-camera in a far more basic manner.  I have to confess that since I have not used the flash very much, and not for some months, so now I have now completely forgotten how it works and will really have to start again by reading the manual and testing out some basic arrangements.  However, I managed to take this portrait of the two of us outside the caravan with the on-camera flash to highlight us, whilst using a smaller aperture to slightly underexpose the background.  It doesn’t have that polished look that comes with off-camera flash and a softbox (which was what Mark achieved very well with his photographs) but is still less flat than the image would have been if shot with no flash.  Back to the drawing board though!