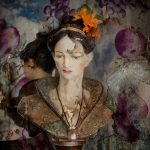 My third lecture follows on from my first two – ‘Urban Exploration to Fine Art: A Photographic Journey’ and ‘iPhoneography to Fellowship: My Continuing Journey’. In this talk I will discuss the various photographic techniques that I have been experimenting with, continuing to develop my work and the way that I see things.

I will be showing monochrome photographs shot in locations in Venice and the UK, a portrait commission from Tim Andrews (involving a man with Parkinson’s Disease who has been photographed during the last eight years by 370 different photographers), and experimentations with a Holga 120 film camera. I’ll be sharing some new iPhone images, a method of photographic capture that I am still greatly enjoy and use regularly, and of course there will be images featuring the texture overlays that I love to work with, including a series of vintage postcards.

There will also be a series of colour photos processed in an ‘analogue’ style to replicate shots taken with an old camera, composites capturing the essence of a rainy day in London, and a set of pictures entitled ‘Treasures of the Chateau’, based on beautiful objects discovered in France.

With this talk I am aiming to demonstrate the new directions in which I am heading, as well as showing more of the style of work that is familiar to viewers of my previous presentations.

In 2014 I was awarded a Fellowship Distinction by the Royal Photographic Society, following on from LRPS in April 2010 and ARPS in June 2011.
I am a member of the RPS Visual Art Group and Digital Imaging Group, previous Honorary Secretary of the former (2013-2018), and a Friend of the London Salon of Photography. I am an LRPS Panel Member, a part of the team involved in awarding the Licentiateship distinction.

I have exhibited in a number of venues, and all my photographs are sold via my website as signed numbered Limited Edition Giclée Fine Art prints on Hahnemühle German Etch 310gsm via my website www.vivecakohphotography.com

Testimonials on my presentations and my work in general.

The presentation will be presented on a laptop connected to your projector, contains around 170 slides, and fits within a two hour time frame including a 10-15 minute tea break.

For initial inquiry please email Viveca at viveca.koh@gmail.com or telephone 07956 517 524

2 thoughts on “A Photographer’s Perspective: My Life Through a Lens – A Lecture for Camera Clubs & Photographic Societies”