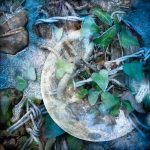 My second presentation follows on from my first – ‘Urban Exploration to Fine Art: A Photographic Journey’ – in which I will discuss my use of an iPhone to take photographs, leading up to the separate challenge of attaining Fellowship with The Royal Photographic Society using illustrations from a book of poetry and prose entitled ‘Star Blossom’, in which my images become more abstract and in some cases a little surreal, utilising multiple layers, textures and double exposures, whilst using the written words as inspiration.

The use of camera phones is on the rise, as the quality of cameras integrated into these devices improves exponentially, and this happened to coincide with my quest to find a new way to express myself from a photographic perspective.  In early 2012 I purchased an iPhone based specifically on reviews enumerating the high quality of the camera, and also on the volume of available photography apps for shooting and processing photographs.

During this time I experimented with the phone camera, almost to the exclusion of my DSLR, and shot many photographs in the square format that I have always loved but using lo-fi/creative camera apps. Also in 2012 I was also commissioned to create photo illustrations for a book of poetry and prose written by my uncle Fergus Chadwick, who saw some of my previously published Blurb books and wanted the same for his latest work. The images from this book formed the basis of my FRPS panel, and I will discuss this Distinction in the talk.

About Viveca Koh FRPS
I am a self-taught Fine Art photographer, and I see potential images everywhere around me, often things that many seem to miss or simply pass by.  Abandoned buildings are a passion of mine, as are the details of places that attract my eye, the minutiae that collects in hidden corners, the small parts of bigger things that are fascinating in their own right.  I enhance many of my photographs with texture layers and overlays, experimenting with digital double exposure, using old documents that I have collected to add a different dimension to the work in question.

In 2014 I was awarded a Fellowship Distinction by the Royal Photographic Society, following on from LRPS in April 2010 and ARPS in June 2011.
I am a member of the RPS Visual Art Group and Digital Imaging Group, previous Honorary Secretary of the former (2013-2018), and a Friend of the London Salon of Photography. I am an LRPS Panel Member, a part of the team involved in awarding the Licentiateship distinction.

The presentation will be presented on a laptop connected to your projector, contains 173 slides, most of these being photographs, and fits within a two hour time frame including a 10-15 minute tea break. Her FPRS panel of 20 mounted prints will also be available for viewing if required.

For initial inquiry please email Viveca at viveca.koh@gmail.com or telephone 07956  517 524

2 thoughts on “From iPhoneography to Fellowship: My Continuing Journey – A Lecture for Camera Clubs & Photographic Societies”