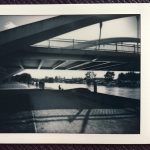 I was given the opportunity to test out this delightful instant film camera, which was a novel experience for me and one that I enjoyed. I was given two packs of colour films for the test, but purchased some black and white film from Amazon. There were technical issues where some of the photos came out with curious circular flares across them, which did spoil a few good photos, and whilst I did mention it to LOMO I never received an answer as to what the problem might be. It may have been a fault with this particular camera, but it would put me off buying one unless I knew it had been resolved.

This is the full version of my article:

The Automat Glass is a real pleasure to use, looking retro yet smart, it’s well-made and handles comfortably. The glass lens has three distance settings from infinity to close-up, and produces crisp and clear images, although shadow tones seem to render very dark even when outside in bright sunlight. However I like this effect as it makes the lighter tones really ‘pop’ and in some cases added dramatic effect. There is a slight vignette at infinity which I personally like.

Included is a ‘Splitzer’ which screws onto the lens and can be turned around to different angles to partially obscure it, combined with the multiple exposure button one can shoot separate images in a single photograph, which can create very surreal effects. The ‘Splitzer’ is very stiff to turn, although this could improve with use. Multiple exposure can also be used to create multi-layered photos, giving a collage effect.

There is a close-up lens attachment which will focus as close as 10cm, although I found using this slightly tricky as what is seen through the viewfinder is not exactly what comes out on the film, making composition somewhat challenging.

The flash is on by default, so one has to remember to turn it off if it’s not required, as it will cause over exposure if shooting close-up. The shutter release button is like a small mirror, making the composition of self-portraits easier. The camera can be attached to a tripod and has a bulb setting allowing for long exposures, and an exposure compensation button to deliberately under or over expose photographs by one stop in either direction.

This camera really brings the fun into instant film photography. It is exciting waiting for the print to develop, wondering if it will work, especially in the case of split photos. Highly recommended.

And the slightly edited version that was published in The Journal:

And some more of the resulting photos:

There was quite bad flare on this one, which was a shame as I really liked this photo….

Next post Review of my Second Lecture from Storrington Camera Club