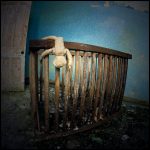 This first presentation encompasses my photographic development over the past decade, which has progressed at a fairly rapid rate following an albeit slightly slower but life-long love and practise of photography.

I discovered Urban Exploration in 2009, and this led to a series of visits to abandoned mental asylums and hospitals, where I spent much time taking photographs and showing these online via the photo-sharing website Flickr.

It was here that I received much positive feedback and encouragement, and gradually developed my technique and post-processing style, which led to my submitting a panel of ten photographs to The Royal Photographic Society for a Licentiateship Distinction, which was attained in April 2010.

I began experimenting with texture overlays in my work and gradually developed a different style of photography, which in turn led to a collection of images based around what remains when people leave a building for the last time. This became my successful Associateship panel ‘Left Behind’ with the RPS in June 2011.

Since then my work has moved towards a very artistic and painterly style, which is why I now refer to what I do as Fine Art Photography. This presentation is not so much about attaining Distinctions from the RPS, although I do discuss the process during my talk, but more about how I have developed in terms of style and maturity of vision over the past three years. There will be plenty of photographs, tales of Urban Exploration and the attendant thrills and spills that are a part of this activity, and even something which may or may not be a ghost!

In 2014 I was awarded a Fellowship Distinction by the Royal Photographic Society, and  I am a member of the RPS Visual Art Group and Digital Imaging Group, previous Honorary Secretary of the former (2013-2018), and a Friend of the London Salon of Photography. I am an LRPS Panel Member, a part of the team involved in awarding the Licentiateship distinction.

The presentation will be presented on a laptop connected to your projector, contains 187 slides, most of these being photographs, and fits within a two hour time frame including a 10-15 minute tea break. Her APRS panel of 15 mounted prints will also be available for viewing if required.

For this talk and for my work in general.

Next post Article on My Favourite Camera for The Journal, August 2016