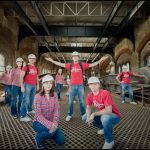 Last weekend Mark and I visited Crossness Pumping Station in Abbey Wood, which is only open to the public a few times per year, and was on this occasion open for the annual Open House event.  After a lengthy queue to enter the building, we were then faced with another queue once inside to enter the engine house itself. Growing weary of my heavy camera bag on one shoulder and tripod in the other hand, I muttered to Mark “this had better be good!”, but it turns out that it was, worth the queueing, being made to wear a hard hat which later gave me a bad case of Helmet Hair, and no one stopped us using our tripods even a volunteer had warned us that we wouldn’t be able to.

Just as well, for the above multiplicity shot would not have been possible without a tripod, being nine separate images blended together in Photoshop and reliant upon the camera not moving inbetween, and nor would the shot below, taken at a slow shutter speed to blur the many people moving about, so that none of them were too intrusive in the frame.

There is lots of information about the buildings via the Crossness link above, so I am not going to write about them except to say that the Victorian ironwork was beautiful, giving rise to the thought “they don’t make them like this anymore”, and to watch the smooth action of one of the rotative beam engines (the green one on the left) gliding up and down was quite mesmerising – I could have watched it for ages. One small piece of technical trivia to whet your appetite for more: these beam engines are each 71 ft long, 75 ft high and 19ft wide, and are the largest of their type in the world.