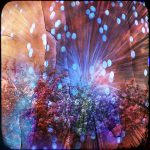 Further images from my new project ‘Star Blossom’, of photo illustrations to accompany the poetry and prose of my uncle Fergus Chadwick.

Walks in the Dark

Poems remembered from walks in
the dark are sometimes spoken
aloud before they are written down.
And sometimes, if it’s dawn, a
rival noise is implicit. A dump
truck approaching the houses,
with refuse aroma. A train
gathering momentum at the
level-crossing. An early
cyclist changing gear.
A delivery-van clashing its
roller door. A milk-float
whining away down the
sleeping avenue that leads
to the river.

February – neither winter or spring –
is on the cusp. The wild plum is
blossoming early. And later on,
there are galaxy clouds of pinkish-white
prunus. But as well as storms, there are
frosts, bitterly hard. Evenings when the sky
is clear at sunset, the birdbath scarcely
trembles, overflowing with reflections.
The vault of the sky is a gradually darkening
cobalt, paler to the west, where the evening
star, balanced on fine points of glitter,
has it all to itself for a while.

The distance of space is unimaginable.
The length of a light-year – just one –
a single light year …
Don’t go there.
Just as well, really, the nothingness
is so big, vastness so extreme.
Its aloofness is incontrovertible.
The well-behaved star has no idea of
its neighbours’ appalling behaviour.
The red giant, the supernova, the
quasar, the black hole.
If three wasps were left in the
whole of Europe, Europe would
be more crowded with wasps
than space is with stars.
Yet there are billions of stars.