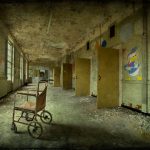 This image from West Park Asylum is actually two images stitched together, although they weren’t shot as a panorama at the time.  The first photo included the window, wheelchair and part of the corridor, but it was missing the Mickey Mouse and Donald Duck murals which were set slightly behind me.  After reviewing this initial shot on the back of the camera, I felt that the composition would work better if I stepped back to include the Disney murals.  However, when checking both shots on the computer at home, it seemed to me that neither was right, as the wheelchair was too far away in the second shot, but the first one was less strong without the mural on the right.

Today (some time after the original photos were taken), I had another look and realised I could probably merge the two shots together to get the best from both images.  This was surprisingly easy using masks in Photoshop, and even though both shots were taken from different distances I was pleased to be able to blend them seamlessly into one panoramic shot.  I hope this goes some way towards capturing the poignancy of the children’s ward at the asylum.