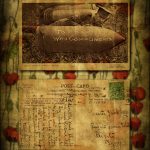 This image features another of my Mum’s vintage postcard gems, as soon as I saw it I knew I had to make something further from it.  The old fashioned captions on the card –  ‘A present for the Kaiser’ on the front, and on the reverse ‘our grand artillerymen like to address a shell before they fire it. This shell being of the biggest size, is addressed to the Biggest Hun’, herald from an earlier age when patriotism reigned strong, and reveal a sense of morale-boosting humour that was so important in order to give ‘our Boys’ every encouragement in the trenches.  King George V on the halfpenny stamp gazes enigmatically into the distance, whilst below him a sister writes to her brother Jack at his boarding school, her Jolly Hockey Sticks’ phrases filled with the innocence of a bygone era: “my dear old Jack” and “we all went for a topping drive on Sunday afternoon”.

In contrast to the fun and innocence of the above, I added a background of poppies which I created in Painter (software which emulates many different types of artists material and media).  In the process of subtle masking out using layer masks in Photoshop I allowed some poppies to appear more as red stains than as flowers, remaining on the photograph and over the writing, to create ambiguity and a sense that all is not quite as light-hearted as initially seen, to remind the viewer that millions of servicemen and civilians died or were injured during the First World War.

3 thoughts on “To Willie With Compliments”