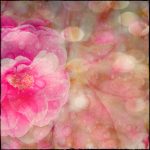 After struggling for some time to produce any new work that I considered remotely satisfactory, I decided to step away from my usual UrbEx subjects and try something completely different, to see if I could get some of my lost inspiration to return.

These are both two photographs combined, of Camelias covered in droplets of water after heavy rainfall, and the top one is actually the revised version of the original image below, which is much darker in tone and character.  The original has two additional texture layers, masked out in places to knock back some of the effect, plus a tone curve to lighten slightly and finishing with a brightness/contrast adjustment layer at the end, as multiple layers and textures often result in a darker image.  I also added a border that I created with some textured brushes.

The top image is a lighter and more delicate version of the original, which I liked upon completion but also felt that there was more potential in there somewhere.  Here, both texture layers have been replaced with a single ‘bokeh’ layer, to remove some of the dark scratchiness of the first version, and I rotated the image to change the balance, with the flower now on the side.  There is some change in the layer masking to add and remove certain elements, also to alter the border.

I am quite happy with the way these have turned out, and will be experimenting with more along similar lines over time.  After all, a change is as good as a rest!