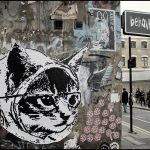 Street Art was one of the first subjects that I photographed “seriously” in summer 2008 after I had first bought my Nikon D700 and 24-70 f2.8, which was the only lens I had for a while until I could afford to buy more. When Mark and I went to East London last Sunday to wander around Shoreditch photographing street art, I decided that I would only use this lens even though I now have three others at my disposal, as it is just right for capturing close-up detail as well as broader views, and I work much faster when I am not having to keep stopping to change lenses.  This first shot was in the car park as seen in my previous blog post I Like It When A Girl Can Walk Right By, a proper goldmine of artist’s work, and shows from left to right: Snub, Finbarr and DanK.

This one shot near Old Street was the first Roa that I have seen in person (have seen lots on the web and love this Belgian artist’s work), so was quite excited by this one. There were other interesting little details around it, and the juxtaposition between the rodent and the distinctive letter “R” by Eine made for a satisfying composition.

Just off Brick Lane was the second Roa piece that I had discovered after seeing someone else’s photo of it and Googling the name of the Balti house from the sign to find out where exactly it was. This one was obviously very large since it was taking up the entire side of a building, and quite hard to get a “clean” shot as there were parked cars below, so rather reluctantly I had to cut off his foot.

This one by Kid Acne and Dscreet was near to the Roa bird – I liked its cheekiness and have processed it to emphasise the centre of the frame where all the interest lies, fading out the rather uninteresting buildings in the background.

Found a few pasteups by Bortusk Leer, who specialises in cartoon-like characters painted in bright colours onto sheets of newspaper – I have always found them to be quite endearing in their child-like execution.

Finally found this one as we were leaving Brick Lane and heading for a much needed sit and drink at the pub. I don’t know who it is by, so if anyone reading this can tell me I would appreciate it. I did get another version of this with a woman with a rather large bottom walking past, but decided to use this version with the standing man as the bottom was far too distracting!