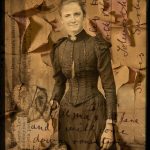 This is one that I did a while back but I thought it was worth writing about the technique I used to create this image.
Emily was a relative of mine on my Mother’s side of the family, and I liked this portrait of her looking ever so slightly self-conscious,
which is how I usually feel when someone is pointing a camera at me, so I could identify with her there!

The original portrait of Emily

First I found a portrait of me in a similar pose to Emily, and then used the Lasso Tool to select just my face and copy and paste it as a separate layer
onto Emily’s face.  I made the Opacity of my face about 50% so that I could see Emily’s features underneath my own, then used Edit>Transform>Rotate
to tilt my features to the same angle as hers.  I had to rescale my face slightly to make it match as closely as possible,
and when I was happy with this I changed the Opacity of my face layer back to 100%.

Obviously my face was the wrong colour, so the next step was Layer>New Adjustment Layer>Black and White
to make the entire image the same hue.

In order to make the photograph look really old again,
I added Layer>New Adjustment Layer>Photo Filter, and chose a Sepia Filter set to 100%

To creatively ‘distress’ the image and to make it my own, I added a photo Layer of peeling paint that I had shot at an abandoned building somewhere,
Blend Mode>Multiply, and had stored in my Textures Database on my computer.  Using a Layer Mask and a soft fat black brush
(Hardness: 0%, Mode: Normal, Opacity: varied but never 100%, Flow: Normal)
I selectively painted out some of this texture over Emily/me on her face and torso, but it is still subtly there in places as a creative effect.

Next I added a vintage postcard from my collection, which I had scanned for my Texture Database,  Blend Mode>Multiply as before,
and again via a Layer Mask very lightly removed parts of the writing over her face, but left most of it there.

The final step was to add a tetxure layer with a border, to darken the corners and to give an overall ‘very old and
been in a damp attic for decades’ look to my new portrait.