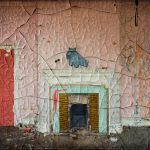 When I saw this scene, I felt that it had the look of a painted scene, extending beyond the actual reality of the painted dog by artist Luke Da Duke into something unreal, almost like a doll’s house. I set about deliberately photographing it in a very precise way, keeping all the lines as straight as I could, which necessitated lots of fiddling with the tripod to get the composition right whilst at the same time avoiding any converging verticals or distortion. I know that this can be corrected in Photoshop but I just wanted to get it as right as I could in camera. One of these days I’ll get a tiltshift lens to make this easy!

When it came to processing, I added a linear tone curve (any alterations I make are always as Adjustment Layers as these are non-destructive and can be turned on or off – wish I’d understood this concept when I first started using Photoshop many years ago!) and then a fairly pale texture from Skeletalmess that just added a bit of grubby distress to the edges. Finally I added a texture of cracked paint that I’d shot at Hellingly the week before, which gave exactly the look I was after – that of an old painting, possibly created on wood, where the painting was cracked and flaking – the kind that you might see in a museum or church. What do you call these? I can’t remember and Google has not helped – I was thinking fresco but I don’t think that’s it. Any suggestions gratefully received!

Finally I added a Brightness/Contrast layer and brightened the image to +75, as the addition of both textures layers (especially the latter) had made it a bit muddy. On this occasion I didn’t have to do any of the usual painting out any of the effects with Layer Masks, and the result was ‘A Room With A Dog’.