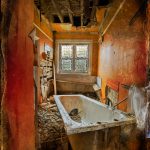 This is one of the photographs selected by the Editor of “The Transmitter” magazine, to appear in the article about me and my work.  It was taken last month at an abandoned house quite local to me, first spotted by Mark when he cycled past one day.  All Urban Explorers seem to have this built-in antenna when it comes to sussing out a potential explore – we only have to see a hint of hoarding or Heras fence to think “Oooh!  How can I get in there?”, and this place was no exception.  Mark went some days before me, but I later checked out the place alone when he was away for Christmas.  I don’t usually like exploring alone, it can be quite spooky and there is always the ever present risk of a dodgy floor to fall through, or worse, hostile squatters or other “undesirables” who might not take kindly to some posh bird with a camera showing up as they are about to crack open the Special Brew.  So I was very good, I told Mark where I was going and when, so that if he didn’t hear from me later he could at least phone my Mum (who would’ve killed me, if I wasn’t already dead)/the police/the ambulance, and then set off in my car to visit “House S”.

On arrival, I only had to climb over a low wall and heap of rubble, and the door was open a few inches so I was able to get in without any problems.  Stood in the hallway and had a good listen for signs of anyone else being there, but despite there being evidence of mass occupation at some point (mattresses and LOTS of beer cans everywhere) there was no sound except for the traffic outside, so I ventured in and set about my business, whilst being ever aware of my environment and listening for unexpected noises.

This bathroom on the first floor did look very unsafe, I could have squeezed around to the left of the bath but felt I could end up on the ground floor without using the stairs so decided against it.  Being me I wanted to make a close-up photo of the unfortunate dead pigeon in the bath, persuaded myself to be careful and decided not to.  But this shot through the open doorway, with the vivid orange walls and that pretty stained glass window in the background worked well as a composition, and when I got home (safe and sound!) I applied a texture layer to it to really emphasise the ‘grunginess’ of the interior, which I selectively removed with a layer mask in the areas I wanted to highlight.  The result was ‘Bath Time’ – anyone fancy a dip?

Next post The Last Days of Hell / Stage Struck