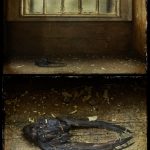 This photograph was taken on 21st January 2010, in a very soggy abandoned asylum in Wales – I probably ought to be posting it tomorrow, but here we go.

This beautiful bird (is it a Swallow? a Swift? a Housemartin? I wish I knew), lying dead on the windowsill, it’s feathers soaking wet, had no doubt died of exhaustion after flying in to this building through an opening, then battled fruitlessly to escape. He or she could see the outdoors from within, could feel the brightness of the sun pouring in through the window, but could not get past the cold and unforgiving panes of glass. This is one of the saddest things I have seen during my urbex travels over the past couple of years – I almost decided against photographing it because it upset me so much, but equally I felt it was important to try and capture this feeling.

I made this image a diptych as I wasn’t sure that the top photograph was clear enough as to what was lying there on the windowsill. However, now that I have finished the piece I am not so sure and wonder if the top shot could work as a standalone image? But then again, whilst it gives the bigger picture, context, it doesn’t show the detail of the bird which I feel has to add an extra poignancy and therefore am confident that the two work perfectly together.

p.s. the title of this image is courtesy of Roy Batty in ‘Bladerunner’ (one of my all time favourite films) – I’ve been waiting for some time to use it, and then this image came along.

10 thoughts on “Fiery The Angels Fell”