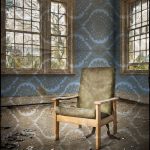 This was taken in the smaller building on the opposite side of the road from the main asylum complex at Hellingly, and was possibly some kind of admin building.  There was not much left inside bar a few battered chairs and some tables, but oddly there were some shoes in two locations.  I liked this chair because of the dangling straps underneath – at first, due to my typically over-active imagination, I thought that they were some kind of restraints, but quickly realised that they were simply the base of the chair to support the cushion!  There was also some more of the strange sticky tape writing on the floor which I liked.

Spent some time setting this up, with the camera in place on the tripod so that the windows equally framed each side of the shot, and moving the chair until I was happy with the position and angle inbetween the two windows.  This piece is two exposures combined, one for the detail outside the window and the other for the interior, and the texture overlay is a piece of wallpaper shot elsewhere in the asylum.  I deliberately left it flat as I wanted it to look obviously overlaid and two-dimensional in contrast with the rest of the scene, and only slightly masked out the texture on the chair, windows and shoes to give them more prominence.

The title is courtesy of Joy Division from ‘Isolation’.

4 thoughts on “A Blindness That Touches Perfection”