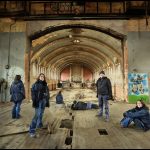 Mark and I visited Hellingly Asylum today, for what will probably be one of the last times as demolition is occurring at a rapid rate now.   A large part of the site is already built up with new houses – strange to drive past the office of the housing company and see them welcoming prospective buyers to have a look around – the houses all look very nice, but what would people feel if they learned that their potential new home was on the site of an old mental asylum?  It shouldn’t matter, but anyone sensitive to atmospheres must wonder if they would feel things that they would rather not feel, once armed with the knowledge of what the land once housed, and of the memories it must surely hold.

I first visited Hellingly in April 2009 – it was my first ever urban exploration, which got me completely  hooked, and I was like a child in a sweetshop, taking pictures of anything and everything around me, as I had never been anywhere quite like it.  The grand hall pictured here now stands alone, all the corridors that once ran to it like arteries have now been demolished, and the building sits folornly in the open like a cat left out in the rain.  I wanted to kick off with a multiplicity shot of Mark and me, taking centre stage at the asylum …..

8 thoughts on “The Last Days of Hell / Stage Struck”