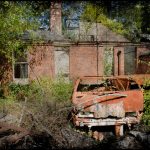 I’ve been reviewing my older folders of photographs on my hard drive, for I know that over time, as I have been taking more and more pictures on a regular basis, I have had less time to thoroughly review each folder and ensure that I have wrung out of it every last “keeper”.  As I am forced by lack of space to move images from an internal hard drive to an external hard drive, whilst these do not become inaccessible by any means, it is still a useful exercise to look through them first and see if any photographs initially overlooked now look better than once thought at the time, when they may have been overshadowed by more “obvious” images.

This photograph is in fact the third ever UrbEx photograph that I took, when I visited Hellingly Asylum for the first time with my friend Jeremy (Romanywg on Flickr), and this was the approach to the mortuary where we found our way in, by climbing through the left-hand window.  I didn’t rate this one much at the time, but returning to it now I feel that it has lots going for it, but it also has a certain sentimental value for me now as this place was my introduction to Urban Exploration, and so much has happened  since then as a direct result of this.  For a start, I would never have met Mark (Blunders500) at West Park Asylum if I hadn’t discovered and fallen in love with UrbEx, so I could say that the above photograph represents quite a significant moment in my life – and it’s always quite an entertaining talking point to tell people that we met at an asylum!

Previous post Cloned Self Portraits: How I Do It

4 thoughts on “Rusty and Crusty All The Way”