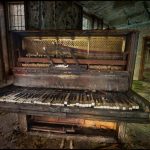 This is quite an old photograph taken at Talgarth Asylum in Wales during January 2010. It was very cold and incredibly damp in there – I don’t think I had ever been anywhere so resolutely soggy – and everything was warping, cracking, peeling, mouldering and rotting, including this magnificent old instrument that was simply left behind.  I always find there is something very sad about pianos in abandoned buildings, it seems so wrong to just give up on them, instead of trying to relocate them to a place where they can continue to be played, to produce music and bring pleasure to those that listen.  A dismal end indeed.

This photograph has also made Flickr Explore, which I was quite happy about!

2014: A late addition: I was very pleased to be contacted by singer/songwriter Dan Tedesco wanting to buy this photograph to use as a cover on his album ‘Death in the Valley’ – it looks pretty good I think.