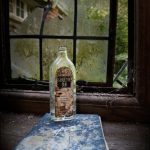 I am very pleased to announce that I have had two photographs accepted for the Royal Photographic Society’s Visual Art Group exhibition, which will run from the 4th-29th January 2011 at Fairfield Hall, Park Lane, Croydon, Surrey. Members were invited to submit up to four photographs, and whilst I would have loved to have had all four in the show, it would appear that no one has more than two accepted, so I am happy with my two rather than just one!

My two entries were both shot at Potters Manor during the summer of 2010: